Tiki torches are a great way to add a unique flair to your outdoors. Bulb or candle tiki torches are great and all, but constantly replacing their power source gets expensive.

So, why not opt for a solar-powered torch, instead?

Solar tiki torches are safe, convenient, and best of all, extremely eco-friendly as you get your light source directly from the sun.

Here are five of the best solar torches based on performance, design, and durability. 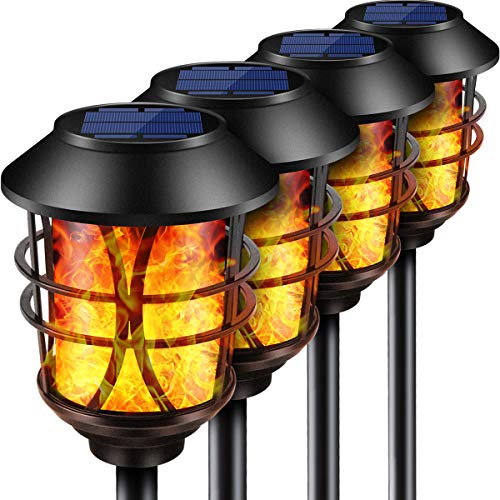 TomCare is a name almost anyone in the world of solar electronics is familiar with. One of the company’s most well-received products is their waterproof solar torch.

The TomCare Solar Lights have a classic torch design. The “head” is made out of heavy-duty metal and finished off with a beautiful black matte. The stakes and poles are constructed with ABS plastic, so you won’t have to worry about them accidentally snapping in two.

Other than their durability, these lights brave the great outdoors with little effort due to their rustproof, dustproof, and heat and frost-resistant design.

If that’s not enough, they come with an IP65 waterproof rating, meaning it won’t die or need extra care during the stormy seasons.

When it comes to operation time, this solar torch can run up to eight hours in summer. During winter, where there’s less sunlight, it’ll work for five hours. 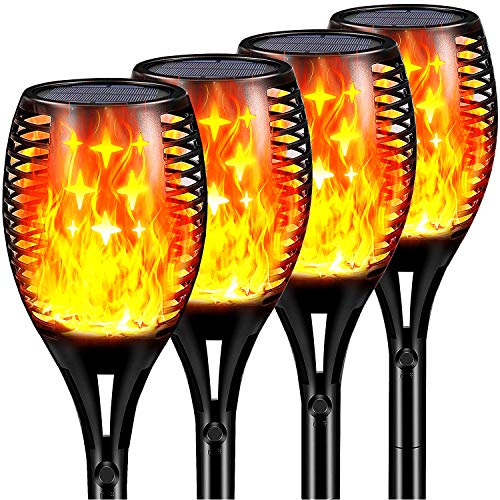 The Topmante Solar Torch Lights feature a soft and lively glow aided by their 96 LEDs lights.

The built-in 2200mAh battery allows the torch to stay brightly lit for up to 12 hours if charged for a full eight. Plus, the LED lights themselves have a lifespan of 50k hours, so you won’t have to worry about replacing them for at least five years.

We also love that it has an IP65 waterproof rating and rust and dust-free design. These features allow the torch to work at full capacity throughout the year without a hitch, even in especially dire weather conditions.

Furthermore, it has a built-in light sensor that allows the torches to power on automatically at dusk and power off at dawn. It still comes with a permanent “off” feature, just in case, but it’s certainly convenient to not have to manually turn the torches on every time night falls. 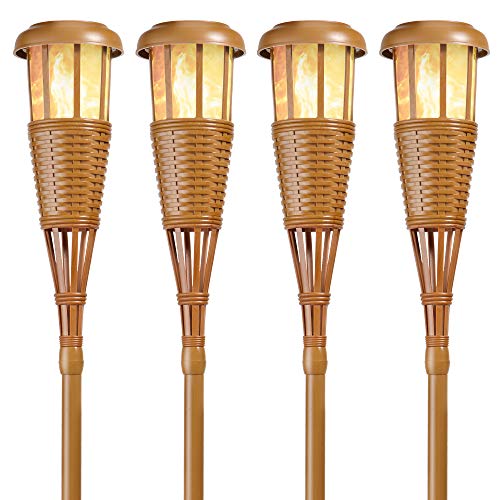 Other than the beautiful tropical-inspired design, the Newhouse Lighting Solar Torch is another model that performs astonishingly well at night. In fact, the company is so confident about their product’s performance that it comes with a massive five-year warranty—the highest on this list!

These torches are 54 inches tall and approximately 5 inches in diameter. We reckon that’s more or less the ideal height a tiki torch should have.

The Newhouse Solar Torch comes with a pair of 600mAh NiCad batteries, which gets the lights to stay lit for up to five hours during summer. However, you’ll be glad to know that these torches work perfectly well with 2200mAh batteries. So if you have a spare lying around, pop them in and these torches will work for up to 10 to 12 hours at a time.

I also love the beautiful flickering flame effect it comes with, as it creates a pleasant, realistic, tropical ambiance right outside your house. Moreover, the torches automatically turn on when the sun goes down, so you don’t have to manually turn the torch off and on every night. 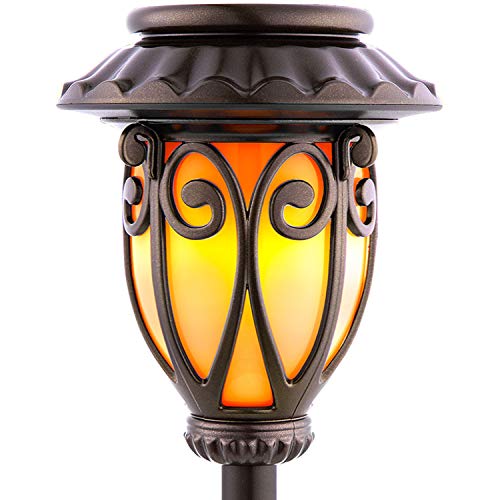 The Camabel Solar Torch Lights adopt the classic 1900’s torch design which we absolutely adore. Instead of beachy vibes, it gives off a neat, luxurious air that looks quite astonishing on your front porch or backyard.

Each of these lights features a stainless steel waterproof design with a rust-resistant black finish. We also like how they can easily be adjusted to three separate heights to suit your tastes, whether it be 24, 40, or 56 inches.

Their rechargeable batteries come with an 800mAh capacity. Although it’s not as strong as Topmante’s 2200mAh battery, it still has a relatively long lifespan of 500 cycles.

The torches themselves have a glowing duration of up to eight hours after they’re left to charge in direct sunlight for six hours. Furthermore, the flickering effect this torch has makes the flames look quite indistinguishable from the real one. It’s exceptionally bright and illuminates its surrounding area with ease. 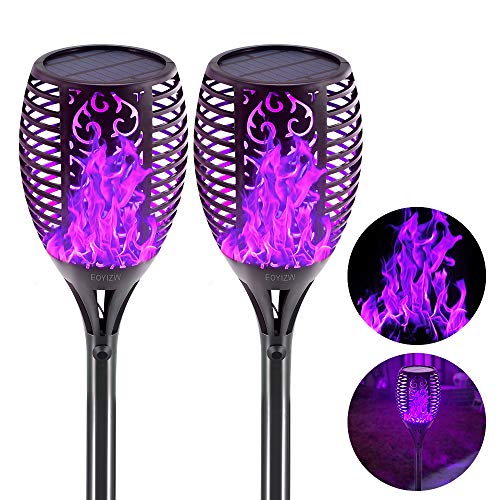 If you’re searching for a solar light that comes with unique colors, you may want to check out the EOYIZW Solar Torch Light.

Other than the regular yellow flame you’ll see in most tiki lights, this product also gives you the option to choose purple and blue colored lights. This makes them perfect for Halloween or if you’re looking to add a darker and more relaxing ambiance to your backyard.

Similar to the TomCare solar lights, the EOYIZW can run for up to eight hours straight during summer and five in winter. It’s also waterproof and dustproof, meaning it can easily withstand rain, snow, or even hail.

These solar lights can be easily extended to 30.7 inches or 43 inches in height. Plus, due to the built-in IC, the flames are extremely realistic and light.

Its solar efficiency is 17%, which means its recharge or transfer rate is slightly slower than TomCare. However, as long as it’s placed directly under bright sunlight, it’ll work just in time for your nightly festivities.

Solar tiki torches are available in a number of styles, colors, and materials. In order to find the torch that’ll bring light to your backyard, here are some important factors to consider!

Solar tiki torches are nothing without light, which is why the level of brightness the torch has is one of the first things you need to look at.

Cheaper solar torches would sometimes shine brightly for the first few days, but slowly dim out as time passes.

Therefore, it’s best to search for a torch that has a high lumen rate. The ideal lumen rate of solar torches is 35 to 50.

Keep in mind that the higher the lumen, the better. Solar torches lower than 35 lumens will be too dim to fully light their surrounding space.

No one wants a torch that dies off in just a few hours. This is why operation time is directly related to the unit’s solar quality.

Most manufacturers list approximately how long the torch will run. For instance, the TomCare Solar Lights will run for up to ten hours during summer, and five hours during winter. Models of lower quality work for less.

As much as possible, search for a waterproof solar tiki torch. You wouldn’t want your torch to die after a light drizzle, or have to worry about removing them from your yard when the weatherman announces it’ll possibly rain tomorrow or the next day.

Torches with a P65 waterproof grade are designed to be completely dust and watertight. According to Blair Haas, chief executive officer at Bud Industries, IP65 enclosures are tight enough to be protected against water projected from a nozzle.

Unless you’re facing heavy rainstorms on a regular basis, a torch with an IP65 waterproof rating is sufficient. Otherwise, you may need to search for a solar torch that has an IP66 or IP67 waterproof grade.

A solar torch’s conversion rate, typically expressed in percentage, is the relationship between the power captured from the sun by the solar panels and the capacity stored. In other words, it explains the efficiency of the solar panel.

Generally, solar torches have a conversion rate of 12 to 20%. Similar to the lumen rate, the higher the conversion, the better.

Keep in mind, however, that the efficiency of the solar panels doesn’t determine the quality.

In fact, we’ve owned several solar torches that only yield about 12% but works perfectly fine. Granted, they take a bit longer to “recharge”, but since we only use them at night, they have over eight to ten hours to fully juice up their solar meter.

How does the solar torch perform during winter? Is it frost-resistant? How about during the rainy season? Sure, it’s waterproof, but is it rustproof? Does it require constant maintenance? Does it “cloud” easily? What is the material made of?

These are some of the questions you’ll need to ask yourself when buying a solar torch.

Some torches, while they work perfectly during the summer, they die out in wintertime because they’re not equipped to handle extreme cold. Others require semi-regular maintenance because they fog up or cloud too easily, which subdues the torch’s brightness.

Therefore, we strongly advise you to buy torches that are made from high-quality heavy-duty metal and are both rust and dustproof. They need to be durable enough to stand whatever temperature and condition the environment throws their way.

After all, no one wants their tiki torch to snap in two after a particularly strong gust of wind!

There are two primary types of tiki torches: traditional torches that are illuminated by flames, and solar-powered torches that are powered by the sun. In this section, we’ll discuss the pros and cons of each. Are solar lights for you? Let’s find out!

Traditional torches have been around for much longer, which is why you’ll often find them in a multitude of design options. Plus, unlike solar torches, they can be placed anywhere (as long as there’s nothing flammable above them).

Here are some of the pros and cons of these types of torches:

Solar torches are our favorite light option because we don’t have to worry about the fire hazard of open flames. This is especially true on particularly windy days, as the wind may bend the torch’s flames and ignite nearby flammable objects.

On top of that, solar torches are extremely low-maintenance. You don’t need to constantly refill the fuel and replace candles or batteries. Also, you won’t have to worry about extinguishing them manually.

Tiki torches remind us of summer vacations, pool parties, and tropical beaches, which makes them the perfect decorative choice for lighting up patios, walkways, and decks.

Our personal choice for the best solar tiki torch lights is the TomCare Solar Torch due to its overall performance.

Compared to all the products we’ve reviewed, the TomCare Torch has the highest efficiency and lumen rating, two of the most important features tiki torches can have.

Why Do Solar Lights Come On During The Day?

How To Make Solar Lights Brighter: A 10 Step Guide

How to Clean Solar Lights: Our Expert Tips

How to Charge Solar Lights Without Sun: Try These 3 Tips

How Long Do Solar Lights Last?

How Do Solar Lights Work?

7 Benefits of Solar Lights You May Not Have Considered

As an Amazon Associate I earn from qualifying purchases.